A Powerful Secret is the the story of a family, first and foremost, with some political and corporate intrigue as well. I received a copy of the book in order to facilitate this review. I

A Powerful Secret is the the story of a family, first and foremost, with some political and corporate intrigue as well. I received a copy of the book in order to facilitate this review. I found the characters likable, and while I normally wouldn’t really enjoy a political story, I would say that the majority of the book is focused on Sean and the family relationships. Of course I won’t tell you what the “powerful secret” is, but reading along as Sean comes to terms with that secret draws you closer to his character. I was unaware at first that this was the second book in a series, but I didn’t have any problem following the story without having ready the first one. I now want to read the first one, as well as the third story, which follows Sean’s younger sister Sarah. The authors include a glossary at the front of the book with common abbreviations that are found in the story, which I found helpful. Also, at the end of the book is a bonus feature, “Birth Order Secrets”. You will discover why when you read the author bio’s below. Also below I am including descriptions of each of the books in the series! 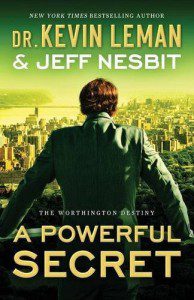 Sean Worthington is shocked when he hears his older brother Will announce that he will not run for New York’s Senate seat. In fact, he’s angry. All of his efforts as Will’s campaign manager are now for nothing– and Sean is left to handle questions from the press while Will walks away without a backward glance. Throughout his life, Sean has felt like an outsider in his own family. And not being told about his brother’s plans is just one more piece of evidence that he’s right.

Tired of being the odd one out, Sean is determined to forge his own path. Little does he know that it’s not easy to escape your family–especially when a powerful secret from the past threatens to explode everything Sean ever believed.

Dr. Kevin Leman, the New York Times bestselling author of more than 50 books, including The Birth Order Book and Born to Win, has made thousands of house calls for Fox and Friends, The View, Today, Bill Bennett’s Morning in America, CBS’s The Early Show, The 700 Club, CNN, and Good Morning America.

Jeff Nesbit, a former senior communications official at the White House and former director of public affairs for two prominent federal science agencies, is a strategic communications advisor and the author of 20 novels. He writes At the Edge, a weekly column for U.S. News & World Report.

This book is the second in a series called the Worthington Destiny. The first book focused on older brother Will and is entitled A Perfect Ambition. Here is the description of that book: 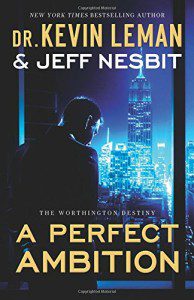 It’s time for Will to forge his own path. But the force that drives him to greatness could also destroy him– and his family.

As the firstborn son of an old and powerful family, William Jennings Worthington VI knows what it’s like to be under pressure. Groomed from birth the relentless message that he was destined for greatness, Will has always pushed himself to succeed–nearly as much as his never-satisfied financial tycoon father pushes him. Becoming CEO of the world’s largest and most adventuresome oil company seems the next logical step on the success ladder. But when circumstances turn, Will finds himself staring down a road that leads to Capitol Hill. Can he trade the board room for the Senate floor? Or will family secrets keep him from his destiny?

And the next book in the series will focus on Sarah, the youngest Worthington sibling. Here is a description of A Primary Decision: 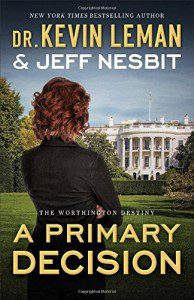 The road to power and position is fraught with perils, even for a Worthington. But Sarah does not intend to lose.

Sarah Worthington never expected to become the US attorney general–at least not this early in her career. Plunged into the vicious vetting process, with all sides digging for secrets in her family closet, she steels herself for the path forward. Nothing will deter her from making her mark on the world in the biggest way possible–even if that means prosecuting the current president of the United States.

Yet powerful forces conspire behind the scenes to take the Worthington family down, and the president orders her to close the investigation. Will she comply? Or turn the tables to pursue her ultimate dream–the US presidency?