Hey hey hey! Another book review! I’m getting caught up on my list!   So this time I received a copy of the book Always Watching by Lynette Eason. I received the book for free

Hey hey hey! Another book review! I’m getting caught up on my list!

So this time I received a copy of the book Always Watching by Lynette Eason. I received the book for free in exchange for my honest review. This is the first book in a new series by this author, called Elite Guardians. Many times when I am reviewing, I end up jumping somewhere into the middle of an existing series, so it was nice to be able to read the first one! 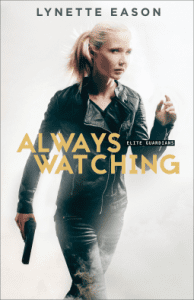 So, here is the book’s description and stay tuned after that for a few thoughts from me!

The bodyguards of Elite Guardians Agency have more than just skill and prowess in common–they’re also all women. When it becomes clear that popular psychiatrist and radio personality Wade Savage has a stalker, his father secretly hires Elite Guardians in order to protect his son.

But when Wade’s bodyguard is attacked and nearly killed, agency owner Olivia Edwards must step in and fill the gap. Olivia’s skills are about to be tested to the limit as Wade’s stalker moves from leaving innocent gifts at his door to threatening those closest to him. Olivia has the feeling that she’s next on the list. And to complicate things even further, she realizes that her heart may be in as much danger as her client.

Bestselling author and fan favorite Lynette Eason drops readers right into the action in this fast-paced new series with a unique twist. Readers will love these strong female characters who put it all on the line to save lives.

This is definitely a fast-paced thriller that will leave you on the edge of your seat. Also, I believe in this book we are introduced to characters that will have larger roles in subsequent books in this series, so it was nice to have the heads-up! And while it is jam-packed with action, this is also a faith-based book, which is a nice change of pace from some of the doom and gloom action stories. I will admit that about halfway through the book, I thought that I knew who the culprit was, and found out that I was completely wrong!

I have two “complaints”, however. There were several instances where the narrative changed to another person’s point of view with no pause or transition, causing me to have to track back some and make sure I knew where I was and whose eyes I was viewing the story through. Also, there were a few times when there was some repetitious dialogue. One character would say something, and then the other character would say basically the same thing right back to them.

But for the most part, I enjoyed this book and do sincerely look forward to the next in the series. I’m hoping that some of the relationships that developed in this book will continue and at least have a mention in subsequent stories.