Well, once again, just trying to get caught up on some book reviews. I had a period of time where I agreed to review too many books at the same time, but even though it

Well, once again, just trying to get caught up on some book reviews. I had a period of time where I agreed to review too many books at the same time, but even though it is late, I am going to keep my commitment and get the reviews out there.

So, next up is Courageous by Dina Sleiman. It is the third book in a series called Valiant Hearts. I have not read any of the other books in the series, but had no trouble following along. 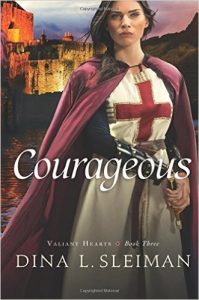 Inspired by the vision of the Young Lady Sapphira, Rosalind of Ipsworth joins a group of men, women, and children as a defender of the cross, seeking to free captives from prisons near Tripoli. She gladly gives herself to the cause, as she’s haunted by a tragic mistake and no longer deserves such joys of marriage and family might bring.

Sir Randel Penigree was reared to serve in the church, but dreams of protecting the innocent as a knight. Joining a crusade to escape humiliation at home, he finds himself drawn to Rosalind as they partner to train and protect a group of young adolescents. When they face political machinations, danger, and an unknown enemy bent on their destruction, they are forced to reconsider their priorities and the very nature of the God they serve.

I believe this book is geared more towards a young adult audience, that doesn’t bother me any. Even though I’m way past that age range, I can still enjoy it. From what I understand, the characters in this book were mentioned as secondary characters in the previous books in the series, which is why you can jump in and read this story without having read the rest.

The characters were likable and of course, you are rooting for them to get together in the end. There is both romance and action in this period story. I also enjoyed Rosalind and Randel’s relationships with the children under their care. And if you couldn’t tell from the description of the book, this is Christian fiction, with a theme of redemption and forgiveness.There were some parts of the characters’ back stories that I was surprised by, but not bothered by. But of course I don’t want to give away what those were. There were also elements to the story behind the Crusades that are clearly still relevant today.

From reading some other reviews, I believe that the previous books in the series might even be better, so I look forward to reading those eventually too.