Well, can you believe it? I’m actually posting two book reviews in one day, so I’m definitely still plowing through my list! Still several more to go through, but we will get there soon! First,

Well, can you believe it? I’m actually posting two book reviews in one day, so I’m definitely still plowing through my list! Still several more to go through, but we will get there soon!

First, of course, here is the book description: 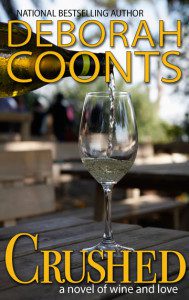 In Napa Valley, he who has the best grapes wins. And in the pursuit of perfection, dreams and hearts can be crushed.

Sophia Stone is a widow on the brink of an empty nest, stuck in an unsatisfying job managing the vineyard for a mediocre Napa vintner. Faced with an uncertain future she wonders how do you choose between making a living and making a life? Between protecting your heart and sharing it? Five years ago, after her husband was killed in an accident, Sophia put her heart and dreams on ice to care for those around her. Now her home, her dreams, and her family’s legacy grapes are threatened by the greed of the new money moving into the Valley. Sophia has a choice-give up and let them take what is hers, or risk everything fighting a battle everyone says she can’t win.

Nico Treviani has one goal in life:make brilliant wine. A woman would be an unwanted distraction. So, while recognized as one of Napa’s premier vintners, Nico finds himself alone… until his brother’s death drops not one, but two women into his life-his thirteen-year-old twin nieces. In an instant, Nico gains a family and loses his best friend and partner in the winemaking business. Struggling to care for his nieces, Nico accepts a job as head winemaker for Avery Specter, one of the new-money crowd. And he learns the hard way that new money doesn’t stick to the old rules.

When Sophia Stone gets caught in the middle of Nico’s struggle to remain true to himself or sacrifice his convictions to make stellar wine, both Sophia and Nico are faced with a choice they never imagined. A choice that might extinguish the hope of a future neither expected.

This is the first in a four book series, as described on the author’s website: “This series follows four women (and their men) each of whom toils in her chosen vocation in the farm-to-table movement- the winemaker, the artisanal cheese maker, the baker and the restaurateur. These are feel-good stories as each woman finds the life she was meant to live- and serves up some killer wine, cheese, and chocolate.” From the description, I believe these other women were introduced to us in this first book, so it sounds like we will be able to follow up on some of other favorite characters.

I am definitely no wine expert, but it seems like the author is, as she shares plenty of technical information. Every once in awhile it seems a little much, and sometimes the conversations seem a little awkward in how technical they are, but it probably wouldn’t seem that way to those who are experts in the field.

The love story was both great and complicated and left you guessing what would happen between these two.  The characters are believably imperfect which makes you love them all the more. And a word to more sensitive readers, there is a small amount of racy stuff in this book, but not a lot. Just a heads up as I know some people are sensitive to that.

This author has written another series, the Lucky O’Toole Vegas Adventure Series, which I am interested in looking into, and I do want to follow up with the rest of this Napa series. And it looks like she has even more series’ on the way.

Definitely worth your time to book up any of these books. To find out more check out the author’s website: www.deborahcoonts.com