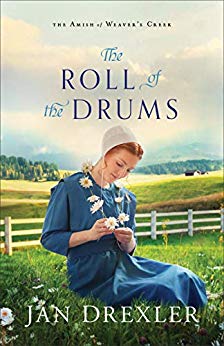 Geesh! I haven’t posted anything new for a WHILE now! Hopefully this book review will get the ball rolling and I will get back in the habit of updating. I have plenty of new things

Geesh! I haven’t posted anything new for a WHILE now! Hopefully this book review will get the ball rolling and I will get back in the habit of updating. I have plenty of new things I want to share with you, so I will try to do a better job of staying active over here. How about a book review first??

Recently I had the chance to read The Roll of the Drums (The Amish of Weaver’s Creek Book #2) by Jan Drexler. I had not read book one in the series, and although I’m sure it might have a bit of useful background on the family, this book is definitely able to be a standalone read. I have read other books by Drexler in the past and I enjoyed them and for some reason I tend to enjoy Amish fiction so I was excited to read this book. 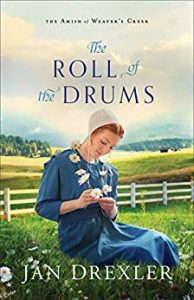 First, let’s start off with the book’s description and then I will share my thoughts after that.

“Ruby Weaver’s curly red hair isn’t the only thing that sets her apart from her Amish community in 1863. Twenty-eight and single, Ruby doesn’t believe a woman needs to be married in order to be happy. Her ailing friend Lovinia Fischer, however, has other ideas and wants Ruby to promise to marry her husband after she dies. Never imagining she’d have to fulfill that vow, Ruby agrees. And she’s not the only one. Lovinia has extracted a similar promise from her husband, Gideon.

With both Ruby and Gideon reluctant to keep their promises, a compromise must be reached. Ruby will spend her days with Gideon’s family– helping to raise the children and keep the house– but her nights will be spent at her sister’s neighboring house. But this arrangement raises eyebrows in their conservative Amish community, and it soon becomes clear that Ruby must make a decision– marry Gideon or turn her back on her friend, the children she’s grown to love… and their father.”

So as the reader can tell from the description, this book takes place during the civil war, making it both Amish fiction AND historical fiction, two of my favorites! Although the Amish are peaceful people, some still end up being recruited in one way or another in the war effort and, as you can imagine, this can take a toll on both them and their families. Gideon Fischer and his family have been so affected by the war that he is traveling with a sick wife and three young children and happens upon the Weaver family and Ruby Weaver in particular.

Although today 28-years-old and unmarried does not make a woman an old maid, at the time and in that community it did so Ruby is an interesting, independent character in this story. I always hate giving up too much information on what is in the book, so I won’t describe much to you. I will say that I particularly enjoyed the character of Ruby, how she is perhaps not the typical Amish woman,  and watching the relationship develop between her and Gideon, although I don’t want to give away too much about that relationship. Just know that something develops, alright?

As I said, it was not necessary to read book one of the series, but now I think I probably will and will continue to follow the Weaver family story in subsequent books. As usual, Drexler pulls the reader in and keeps you interested the entire time you have the book in hand.

I received a free copy of this book from Revell Reads/NetGalley in exchange for my honest opinion/review.