A great fully-formed story in a small package! Hey Hey Hey! Another book review for you today! On The Ropes by Hallee Bridgeman! First up, as always, the description: Blow after blow, she hides her

A great fully-formed story in a small package!

Hey Hey Hey! Another book review for you today! On The Ropes by Hallee Bridgeman! 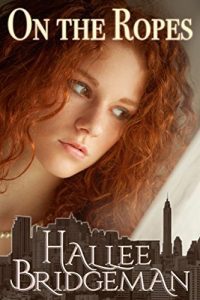 First up, as always, the description:

Blow after blow, she hides her face and fights for her life.

Doctor Ruth Burnette has everything she has ever dreamed possible: the perfect job, a twin sister who is her best friend, and a fiance who is retiring from professional boxing as the middleweight champion of the world.

Then came that fateful night when she witnessed a mafia execution. When her sister is murdered she knows she’ll battle to the last round and never, ever throw in the towel. Now she’s down for the count, in witness protection, anxious, alone except for the faithful company of her German Shepherd at her side.

As the time draws near to when she has to leave her safe little corner she stays on her toes. She has to testify against one of the darkest criminals in New York, she shores up the courage to face the accused from the witness stand. Unexpectedly, he’s not the one who worries her. She wonders what coming face-to-face with his son, Victor Kovalev… her former fiance… will bring. Will Ruth have a fighting chance against the Kovalev family, or will Victor keep her pinned ON THE ROPES?

This is a quick read, as it is technically a novella. However, even though it is short, it is full of intensity, suspense, and, of course, love. As the time comes closer for Ruth to testify, it becomes a constant worry if she will make it there alive, as the Russian Mob has not given up on finding her and silencing her for good. Also in the midst of the crime and intrigue, there is a Christian backdrop of redemption. The story does contain some seedy elements, if you couldn’t guess, so I would say that this book is for adults specifically.

The story does hop around between the present and the past, but it certainly isn’t difficult to follow along, as the transitions are extremely smooth. The love story is sweet, if you can ignore the murder and other crimes. Not that you want to ignore that. Just saying that it is a cute story of how the two meet and fall in love. Especially when her pick-up line is inviting him to church. I also found it interesting when Ruth is in the witness protection program, she has to be careful to not be tagged on social media or anything like that. With the technology people have today, with facial recognition programs and the like, it is not as easy to hide out as you might think.

Despite the length, I found that the story didn’t seem rushed at all and was still an entire, well-developed story. I will have to look for more of Ms. Bridgeman’s books in the near future!

I was provided a complimentary copy this book through BookCrash, in exchange for an honest review.