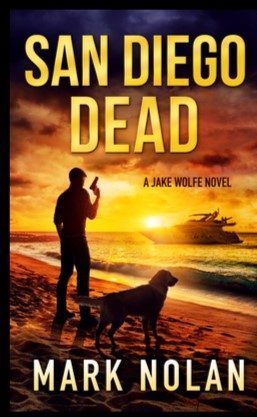 It was meant to be a relaxing holiday for Jake and his adopted war dog, Cody, but violence erupts when he crosses paths with a criminal cartel urgently seeking to reclaim a deadly package.

Jake learns the missing item is a threat to US citizens and vows to stop the cartel from possessing it, no matter what vigilante justice actions he might have to take.

Time is running out and thousands of innocent lives are at risk. Will the two combat veterans be able to retrieve the dangerous item before the killers do? The clock is ticking, but Jake hopes that if anybody can help find the package, it has to be his highly-trained and ultra-intelligent dog, Cody.

Find out what happens next. Start reading the latest Jake and Cody thriller right now and enjoy another fast-paced stand-alone story by author Mark Nolan.

San Diego Dead can be read as a stand-alone novel, or you can start with book one, titled: Dead Lawyers Don’t Lie. All four Kindle Unlimited books in the Jake Wolfe vigilante justice thriller series are available to read free with your subscription.


Readers are saying…
“I absolutely love this series and am always looking forward to the next story. Ever since I first read about Jake Wolfe and his war dog Cody I have been hooked. This book is just the latest amazing read that pulls you in from the very beginning and it is a fast-paced journey that doesn’t end until the final page. It will have you turning pages to find out what happens next.”


“Full of action and moves right along. The characters are fun, dangerous and interesting. It’s easy to forget daily life and just keep reading about Cody and Jake.”


“Fast-paced and action-filled… Jake and Cody continue to go above and beyond when they are called upon, time and again, to protect their country and her people…”
Above reviews from Amazon

Hunted by a deadly assassin.

On the run from a government agency.

Falsely accused, Jake Wolfe is a fugitive in a life-or-death game of cat and mouse.

What happens next? Click now and start reading this action-packed thriller!

A TOP 20 AMAZON BESTSELLER. A mysterious killer who calls himself The Artist is assassinating wealthy lawyers in San Francisco. When war veteran Jake Wolfe accidentally takes his picture during a murder, The Artist adds Jake to his kill list and he becomes a target in a deadly game of cat and mouse that only one of them can survive. How far would you go to protect your loved ones from a killer? Jake wants to leave his top secret, violent past life behind him. But the reluctant, flawed hero can’t ignore his duty and his personal moral compass.

This gripping thriller is full of suspense, plot twists and surprises. It features a cast of interesting characters, including several strong-willed women, two wise-cracking San Francisco Police Homicide Inspectors, one highly intelligent dog, and a philosophical killer who shares Jake’s admiration for Van Gogh paintings but still plans to kill him anyway. As Jake gets closer to unraveling a merciless conspiracy, his life gets turned upside down and the danger level increases, adding to the growing suspense. This entertaining page-turner starts out as a murder mystery and then shifts gears into a high-speed action thriller that takes you on a roller-coaster ride to the riveting ending. A good read for those who enjoy mysteries, suspense, action and adventure, vigilante justice, unique characters, witty dialogue and a little romance too. An international bestseller and one of the most-read novels in kindle unlimited books. Get your copy now and start reading.

Dead Lawyers Don’t Lie can be read as a stand-alone novel, or you can enjoy the whole series. All four Kindle Unlimited books in the Jake Wolfe vigilante justice thriller series are available to read free with your subscription.

Lauren Stephens wakes up to find her husband, Gene, has vanished during the night. His phone is dead. Desperate, she hires Jake Wolfe and his war dog, Cody. They search the house and discover something so disturbing that Jake won’t allow Lauren near it. “No, if you see this, there is no unseeing it.”

Lauren thought she had it all: a loving partner, two great kids, a successful business, and a beautiful home in the San Francisco hills. But all of that is about to come crashing down, due to a missing husband, a hidden past, and a frightening secret that will shock a trusting wife to the core. Gene has enemies, and now they want something from Lauren.

Jake Wolfe is a flawed man who has a habit of being in the wrong place at the wrong time. He wants to leave his secret, violent past behind him, but when Lauren and her children are threatened, his protective instinct takes command. Jake soon finds himself involved in a dangerous conspiracy, targeted for death, and engaged in battle with a gang of killers.

Jake is going to have to think fast and fight hard to protect Cody, Lauren and her kids.

Vigilante Assassin can be read as a stand-alone novel, or you can start with book one, titled: Dead Lawyers Don’t Lie.

All four Kindle Unlimited books in the Jake Wolfe vigilante justice thriller series are available to read free with your subscription.

Attorney by day, assassin by night.

Jake Wolfe is a young lawyer who leads a secret life. Trained by the CIA, he now wants peace and quiet, practicing law and living on a boat with his war dog. But when his city is shocked by a serial killer and he’s framed for the murder of a friend, Jake must race against time to find the killer before he strikes again.

Drawn into a deadly game of life or death; at every step Jake and his loved ones are being hunted by the clever, twisted madman. As the city is gripped in fear of the seemingly random shootings that could strike anybody, Jake investigates and uncovers ominous clues until a shocking reversal of fortune changes everything.

With the clock ticking and lives at stake, will Jake be able to find and stop the killer in time, or will he become the next victim?

Buckle up for a wild ride as Jake Wolfe and his exceptionally intelligent dog, Cody, return to action in this page-turning thriller in Mark Nolan’s bestselling series that has earned thousands of 5-star ratings on Amazon and Goodreads.

Killer Lawyer can be read as a stand-alone novel, or you can start with book one, titled: Dead Lawyers Don’t Lie. All four Kindle Unlimited books in the Jake Wolfe vigilante justice thriller series are available to read free with your subscription.

Mark Nolan began his writing career as a successful entrepreneur who created news stories for businesses that were featured in The Wall Street Journal, National Geographic, Parade, Reader’s Digest and The Associated Press. Nolan was born in San Francisco, grew up in the Bay Area of California, and has also lived in the Pacific Northwest and Hawaii. He has raised two great kids and one very smart retriever dog. He is currently writing book 5 in the Jake Wolfe and Cody series. He tries to make time every day to answer emails from readers. You can reach him and subscribe to his newsletter at marknolan.com.

Find the author on the following sites…

I have volunteered to share my review and all the opinions are 100% my own.

I have to say that I have not read any of the previous books in this series. However, I did not find that to be a problem as far as understanding what was going on.

I admit, my favorite character was the dog, Cody! Which is not to say that the other characters were not great. Poor Jake thinks that he is going to have a chance to relax and vacation with his lady friend and dog, but of course, all of that quickly goes wrong and the book immediately zooms into the fast lane- action, drug cartels, terrorists and the like.

I know that some characters were introduced in previous books, so it may have been helpful to have a little bit more info and backstory on some of them, but again, not necessary. My only gripe: sometimes it felt like dialogue between characters was a bit unnatural, as the dialogue was used to either give a bit more backstory, explanation, or just to educate the reader on something. While the information might be helpful, it just didn’t seem natural as far as human conversations go, and maybe could be left out of the dialogue and put into the narration instead.

BUT, I find myself now wanting to check out more books in the series, so I would encourage you to do the same and stay tuned for what might be next for this team!

Enter Below and Good Luck !!
a Rafflecopter giveaway